Psychologists will tell you that one of the toughest aspects of winning something or indeed, reaching any sporting, personal or financial goal, is lifting yourself or those around you, to levels of motivation to repeat the process or set new targets.

Achieving a goal comes with all sorts of psychological challenges and many athletes describe feelings of emptiness and a fear of the future when something they have worked for since childhood has been achieved.

Sadly, the consequences can lead to deep psychological issues and whilst we scratch our heads wondering why people who have achieved such fame and riches are falling apart, sports stars, in particular, find it very difficult when they suddenly become back page headlines that are floating into the sunset.

Alex Ferguson, the ruthless former manager of Manchester United, dealt with achievement by perpetually dismissing success within hours of a trophy being lifted, breaking up successful teams seemingly in their peak, and rebuilding with new and younger players salivating at the prospect of success.

Those who understood the Ferguson regime and lived in fear of failure such as Ryan Giggs, Gary Neville and Paul Scholes, reached unprecedented levels of glory, whilst those who showed signs of becoming too powerful (Paul Ince, David Beckham, Roy Keane) were dispatched without a hint of emotion.

In the last 10-15 years, England has produced world number one rugby and cricket teams that quickly fell from grace when the party was over, which emphasises that remaining at the top in sport is an incredibly difficult process and demonstrates the unique skills that Ferguson possessed.

When a young Jose Mourinho raced down the Old Trafford touchline to celebrate a late Porto winner against United or slid on his knees through the Barcelona mud to celebrate a goal aginst the club who rejected him, sports fans across Europe watched on in awe at the passion and managerial arrogance of the self-titled ‘Special One.’ 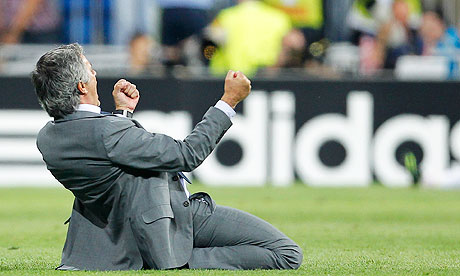 Even Alex Ferguson saw something of himself in Mourinho, befriending him and championing him as one of the great football managers of modern times. A subsequent 21 trophies gathered across Europe justified Ferguson’s assessment and whilst other fans in England loathed him, they soon missed him as a pantomime villain when he moved to Inter Milan.

Animated, incendiary, passionate and eloquent in front of the microphone, Mourinho is box office and even the most ardent Chelsea hater would admit that listening to him was like taking in fresh air in comparison to the nauseating fake, Brendan Rodgers, or the pitiful Nigel Pearson, trying to be a 21st Century Brian Clough and spectacularly failing.

Mourinho knew how to charm the media, he knew how to get under the skin of opponents (Arsenal were a favourite target) and like Ferguson, he was an absolute master at creating a siege mentality whilst sucking unstinting loyalty and admiration from his squad whom he rewarded with outstanding salaries.

After Europe-trotting and picking up trophies at Inter Milan and Real Madrid, he returned to Chelsea and did it again, cantering to the Premier League title and League Cup last season without barely a threat from elsewhere and his all-conquering team were installed as firm favourites to regain the title this term.

To see such a cataclysmic collapse in Chelsea’s form is quite staggering, as is the rapid eradication of Mourinho’s once seemingly impenetrable aura. It would be churlish to describe Chelsea as potential relegation candidates but the vital revenue that arrives courtesy of finishing fourth now looks fanciful unless there is a dramatic change in fortunes.

Mourinho looks exhausted, he looks fed up and as one pundit said, he looks like a man who wants the sack and a multi-million-pound pay-off. Personally, I can’t see that being the case as money is no longer a driving force to Mourinho and he didn’t get to where he is by simply caving in.

There are all sorts of sports psychologists making money in the media by trying to explain Mourinho’s sudden fragile state, but in my opinion, it comes down to the first game of the new season and the incident with club physio, Eva Caneiro, who raced on the pitch to treat an injured player.

Mourinho instantly and irrationally blamed Caneiro for the dropping of points in a draw versus Swansea, calling her naive, before demoting her and no doubt playing a major role in her constructive dismissal for which she is now suing both the club and Mourinho.

Footballers are well used to being protected by managers, with Mourinho, Ferguson and Arsene Wenger all well known for deflecting attention from players by blaming referees, heavy-handed opposition tactics, or claiming not to have seen errors or violent conduct; it’s a loyalty thing and it works.

However, Mourinho did something that Wenger or Ferguson would never have done. He publicly humiliated a woman who had worked incredibly hard to earn a position in a man’s world and who was, after all, merely treating an injured player, which was, when all said and done, the key aspect of her job title.

Mourinho still had a way out, because football is a passionate game and things get said in the heat of the moment. A public apology would have solved everything and would have been an excellent PR exercise that showed a human side to Mourinho in a sport that has often reached soulless levels of intensity.

However, Mourinho doesn’t do apologies and I wonder whether his players have looked at this as a bridge too far. Blaming someone who was popular with both players and supporters who admired her professionalism as by all accounts an excellent physio, was clearly not his finest hour.

If this is the case, Mourinho is a not a lame duck, he is a dead one, because what he would have done is lost the respect of the players and if they are not on his side, there is only one conclusion and it will be an ugly one.

I don’t want to see Mourinho sacked because his situation is a fantastic case study to those who are fascinated by psychology in the sporting arena. If he can turn it around and get his players and staff back on his side, it will be one of the great sporting comebacks and English football will benefit from it.

However, my suspicion is that Mourinho’s attitude to Eva Caneiro was laced with ludicrous sexism (“We would have won if it wasn’t for her”) that even testosterone-fuelled young footballers thought was way below what they deemed common decency and certainly something they wouldn’t want to be seen to be complicit with.

With lawsuits and suspensions piling up, Mourinho is beginning to look a broken man, seeking excuses for failure wherever he can as media onlookers who once admired him, cringe at his increasingly erratic and embarrassing behaviour.

It will take some comeback.

No Replies to "Jose Mourinho - A Psychologists Dream"