Following the dry winter and the exceptionally warm March, everyone is now dragging out the unused raincoats again and this weekend will see an arctic plunge of air that will have The Daily Express penning headlines about ten foot snow drifts that will kill pensioners in their sleep. This, of course, is just a couple weeks after they laid claim, without substance, that the British spring would be hotter than any other in history. If you had packed away your winter clothes, you should really know better as you are about to drag them out again.

Someone commented to me the other day how strange it was that a drought warning was always followed by rain……but without sounding controversial it isn’t really though is it? For as long as my anus has had a hole in it, the weather in this country has always evened itself out, sometimes with a warm and sunny early spring like the one we had in March, but often with a grey and wet July and August like the ones we have experienced in recent years. What is happening now is classic April weather that is well set in for the coming month to top the reservoirs up once again.

What I find slightly funny, but more arrogant, is that “experts” are giving global climate assessments based on about five decades of data from a world that has apparently been in existence for a mere 40 billion years (give or take a month or two). What is more amazing is how often they change their opinions, I really wish I could make a living making up long term weather forecasts, it must be a right old laugh. In my life time, which in the context of 40 million years, has been quite short, I have read headlines about a forthcoming ice age that would cut off the jet stream and force us to build igloos, floods that would turn Dudley into a seaside resort and searing hot dessert like summers that would result in my garden being a haven for rattlesnakes and spiders the size of my head…..well not my current garden actually, that would be fifty foot under what was the English Channel but was now part of a newly named ocean called the Northlantic.

I am still trying to imagine what would be worse, a self catering holiday in the West Midlands or a garden full rattlesnakes, it’s a close run thing, but in the meantime I would advise the government that in a time of water shortage, they need look no further than the first bank holiday of the year or the commencement of the cricket season to quell their fears. Sometimes we get lucky, the rain falls in winter and the sun shines in summer, but more often or not it is all arse about face, but it nearly always equals itself out in the end. Over the past five years hot weather in April and May seems to have mobilised the atlantic fronts to steam across us in June, July and August, but to say this is a trend of how our weather is going to be in the future would be preposterously ambitious to say the least. 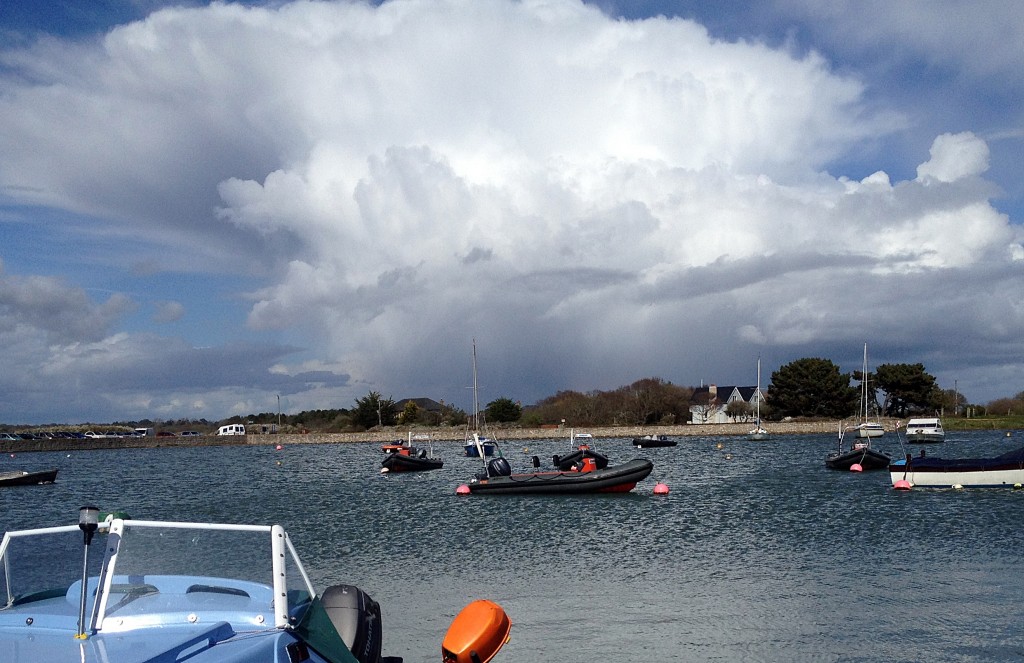 This year we might get lucky and get a nostalgic “proper” summer like the ones pensioners bullshit about (in fairness, it must be easy to forget the wet ones) and from a selfish point of view I would certainly accept that as decent enough deal, the light evenings seem wasted in the rain and it really screws up my Sunday cricket matches when it is wet. However, yesterday Harry and I had a lovely walk from Lymington to Milford (via a quick pint in Keyhaven) along the channel coast, it was a day that featured warm sunshine, rainbows and hailstones a matter of minutes from each other and that, I thought, was a perfect summary of the British weather. We will get sunshine and we will get rain, that is why we are a green and pleasant land of rolling hills and daffodils.

In what months we get sun or rain, nobody really knows for certain, so I suggest that you keep your swimsuit in the same cupboard as your duffle coat just to be on the safe side.

Either that or you can bugger off down to Spain to live with some pissed up Glaswegians, though if you hang around long enough, Glasgow might be dubbed “The New Barbados.”

2 Replies to "Why Does a Deluge Follow a Drought?"