I have been in several pubs and bars over the few days, eating and drinking far too much for my own health. However, as far as I am aware you only live once, though, with the correct information, I am willing to stand corrected and accept that Glenn Hoddle and Eileen Drury were right after all. The one thing that always catches my attention during the visits to these varying establishments is how people present themselves and whether or not they are going to succeed in their position of being attentive and customer orientated. The line between success and failure is a thin one.

A classic example of this was a pub near Alton that I visited for lunch with an old customer last week. When we got there it was like walking into some sort of North Pole theme park experience; it was so bloody cold that at one point I thought I was going to get frost bite. In fairness, when we sat down, the landlady, skilfully playing the part of a horse that had already bolted, screwed up some balls of newspaper and threw them on to the fire with some pathetic looking kindling, a process that raised the temperature by approximately 0.5 centigrade. I felt like smashing my chair on the floor and throwing it on there, it was pretty farcical and we did begin to wonder whether we were the victims of a practical joke. Why on earth would anyone try to entertain customers with no heating?

To make it worse, the landlady (think brunette Barbara Windsor) proceeded to be over-attentive, asking us approximately every three minutes if everything was okay, which, remarkably, it was, even if I couldn’t operate my fingers that were now so numb it felt like they had undergone a local anaesthetic.  If there is one thing I really can’t stand when eating out, it is being interrupted between every mouthful of food and I started to wonder if this woman had some sort of attention disorder and would only piss off and leave us alone if I allowed myself to burst into tears of joy before embracing her tightly and informing her that the food made Claridges look like a Harvester. As a bonus, her voice was real nails down blackboard stuff and her on-going search for compliments was a hideous personality defect that will have customers running to the hills.

Great for group occasions: The Cafe Rouge in Basingstoke

On Friday I went out with all my old friends for a meal at the Cafe Rouge in Basingstoke (above) and I have to say that for what you pay, the service is excellent and the food is not bad at all. Of course, it is not easy trying to recreate a Parisian restaurant in Basingstoke, its twin link with the town of Alencon being the closest you will get to anything French. To make any establishment in Basingstoke feel French is about as ambitious as walking the through the Houses of Parliament in search of an honest politician; it just can’t and won’t happen.  However, all in all, we were left alone to enjoy ourselves and on the regular occasions we ordered more alcohol we were served quickly and efficiently by a friendly waitress. It is an ideal place for a group outing.

However, the best place I have been to for basic pub food in recent times is the Alice Lisle, a Fullers pub just outside Ringwood. Don’t get too excited, it is not an a la carte restaurant where you would celebrate a big occasion like an anniversary, engagement or something similar, but it does the basics brilliantly. I always go on to red alert when I go into a pub that has a menu the length of the River Thames as it generally means they do copious amounts of food very badly. I always remember my mum saying that if you are running a pub and you attempt more than ten dishes, you are heading down a one way track to a town called Disasterville. The Alice Lisle does about eight or nine dishes of basic food like ham and chips (their chips are fantastic by the way) and the quality and the price is spot on. As a bonus, the staff are jovial and not at all over bearing, I really like it there. 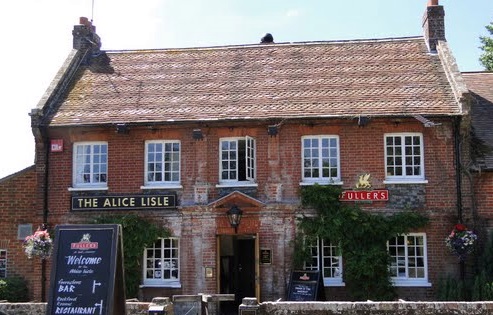 Doing the basics really well: The Alice Lisle near Ringwood

On Sunday, it was off to another pub on the edge of the New Forest, a tourist trap of a place, popular with families, campers and motorcyclists. It was a lovely place to look at but I didn’t really like it as much as I felt I should have done. It always bemuses me when I go to places and on the menu it says things like ”Butchers Sausages” as was the case here. I may need to study my facts, but the last time I checked, it was the general rule of thumb that sausages generally come from a butcher and it is not really anything to brag about on a food menu. If they were florist or greengrocer sausages, it may have been worth a mention I suppose?  They also had “fresh vegetables” something that (call me Mr Picky if you wish) I would expect as a minimum requirement with a meal. I didn’t notice if they served “genuine fishmongers” fish.

The emphasis on the bleeding obvious is something I find off putting and patronising in pubs and my confidence was not enhanced when a lady behind the bar told the guy in front of me that the Chef highly recommended his own pie of the day. That is good news of course, but I wouldn’t expect even the most humble chef to come bounding out the kitchen shouting “DON’T TOUCH MY PIE OF THE DAY…IT’S FUCKING DREADFUL!!”  My grated cheese and “Butchers Ham” in granary bread was adequate enough I suppose, but it will not have me tearing down the M27 in pursuit of another one. Whilst this place was frantically busy trying to cope with the demands of being clever, just down the road at the Alice Lisle, all would have been calm as they stuck to their well drilled process of doing the basics right.

Experience tells me these things:

If a pub has the confidence to serve just seven or eight dishes, it will generally be good. However, If it is in the middle of a tourist trap featuring an ambitious menu, it will generally be a place where  words such as “fresh” and “butchers” are a patronising way of covering up the fact that it is all pretty dull and possibly out of a freezer. The Mayfly near Stockbridge is a classic example of this; for years it has got away with the blandest carvery you could wish to come across, purely because it is a picturesque establishment on the banks of the River Test.

Finally, if it is an igloo on a ludicrously dangerous crossroads somewhere between Basingstoke and Alton and run by the human equivalent of a Red Setter; you can almost guarantee its days are numbered and it will soon be sold off to be someone’s house.