To Guildford and Back!

One thing I always look forward to, is the annual all day booze up with my oldest group of friends. It normally falls in November with my birthday being the excuse to meander in and out of pubs before going on to watch a band or indulge in a hot curry. 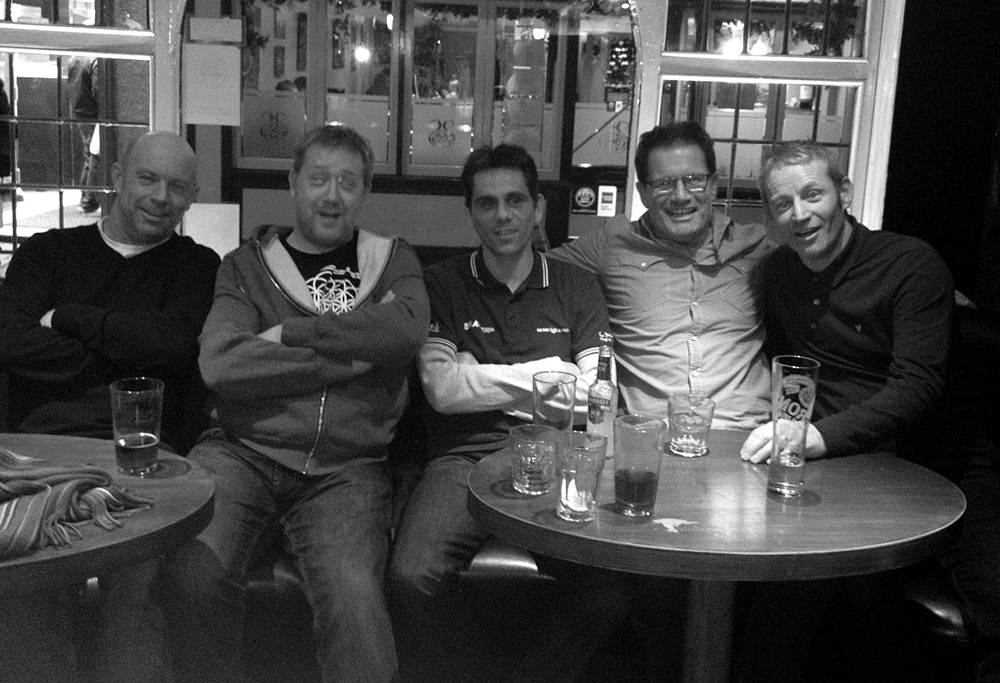 The Traditional Annual Boys Booze Up

This year took us to the town of Guildford in Surrey, with the day culminating with a nostalgic trip down memory lane in the form of ‘From The Jam’ a tribute act that features original Jam member, Bruce Foxton, banging out old hits from the 70’s and early 80’s.

Nostalgia might not be like it used to be but I quite enjoy attempting to throw myself around like a teenager once in a while, even if it does come with a heady mixture of a disjointed hip, a shattered cruciate ligament and an Achilles tendon like a frayed elastic band that is about to snap.

We set off about one o’clock and started, as is now the tradition, with a couple of pints in the Queens Arms, a traditional old pub next to Basingstoke Station. In keeping with a nostalgic day, going in to the Queens Arms is like going back to a perceived golden era of pub drinking.

Inside, there was a group of old chaps doing a crossword, a couple of elderly ladies having lunch and a pair of resident alcoholics who had the look of men with a history of tough paper rounds, failed love and a multitude of gambling debts.

There is nothing quite like train station pubs, they are for some reason, very alluring and a throwback to another age. If everything had turned black and white and all the old boys had lit up Capstan non filters, I’m not sure we would have actually noticed. I really like the Queens Arms, it feels un-sanitised. 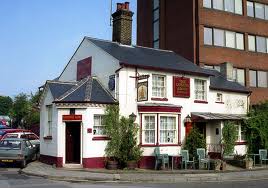 The Queens Arms by Basingstoke Station

When thrown down the gauntlet of finding a cheap train journey, he will always respond with relish and yesterday he came up with an impressive deal that resulted in return ticket for £7.50. How he did this I don’t know, that is because, where trains are concerned, I am more than happy for Pete to be the leader of men whilst I content myself with being a follower.

Upon arriving in Guildford town centre, we marched straight into the first drinking hole, The Star, a Shepherd Neame pub that offers decent beer and an excellent Sunday Lunch for a tenner. We stayed there for a few a while, and then we moved on up the hill to another pub that was okay apart from the fact it was showing football, a conversation killer if there ever was one.

I like football but I was glad when the game was over so we could resume with being sociable. That is the problem with televisions, we are all guilty of being drawn towards them and unless it is a World Cup game or an FA Cup final I don’t really like them in pubs. I went to one not so long that was showing old repeats of Top Gear. Do me a favour.

After that, things got a bit vague but I can remember a plush pub featuring Vodka and Tonic, then, before I knew it, we were leaping around as the leaders of what was soon to become a middle aged mosh pit that featured about thirty blokes who were one more dance away from a date with a panic stricken paramedic and a defibrillator.

It was absolute pandemonium and really great fun but in my heart of hearts, I can feel it in my shattered bones and torn ligaments that really I don’t have many more concerts like that left in me, if any at all. It really hurts this ageing process and leaping around like we did will only serve to inflict further damage to knees and other joints.

When we got out, the euphoria soon evaporated as our sweat stained clothes became cold and damp; the fun was over and all we wanted to do was get to the safety of our warm beds. Now sober again, we descended down to the train station to ensure that we completed a tricky manoeuvre that included stopping at Woking to enable us to race across to the next platform to leap on the Waterloo to Basingstoke line.

Pete knew the drill but he also knew, judging by his sombre face, that missing the train had grave consequences that might just lead to a shivering six hour wait on a platform bench. Quite literally, a chilling thought.

When we got to Woking, we sapped the last ounces of energy from our aching legs and joyfully leapt on to the train, congratulating ourselves heartily on our achievements as we relaxed in our seats and reflected on what had been a successful day all round.

“This train will be stopping at Brookwood, Ash Vale, Aldershot, Farnham, Bentley and Alton.”

Have you noticed the missing town yet?

Never has a train carriage witnessed a collection of sinking hearts like this one. It had split you see, so even though it had Basingstoke written on the front, we were at the back. It was a crushing blow that had Pete, taking personal responsibility, heading butting the carriage window approximately six times.

Sadly, this act of tired frustration failed to divert the train to Basingstoke, so as we meandered through the borders of Surrey and Hampshire, we had to think multilaterally rather than relying solely on Pete. The result was a 20 minute wait in the freezing cold at Aldershot before a heavily negotiated taxi trip that cost sixty quid.

When I eventually got home, I had no option but to laugh myself to sleep.

No Replies to "To Guildford and Back!"