The KGB…You Don’t Expect That Sort of Thing Around Here! 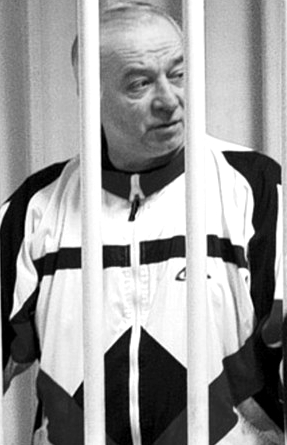 I was watching ‘South Today’ after there had been a murder in some rough looking sink estate a few weeks back in Southampton somewhere.

The reporter spoke to some of the neighbours and one guy said what is now an obligatory statement from someone in the neighbourhood where there is a murder.

“You don’t expect that sort of thing to happen around here”.

My son, Harry, was here at the time and I instantly put my hand up in the air and said, “Excuse me, excuse me, I would definitely expect a murder to happen there”.

It seems that people have it in their DNA to say that either they “Didn’t expect that sort of thing to happen around here” or “He was very quiet, always kept himself to himself” when they are hypnotised by a TV camera.

However, when I heard about that Russian chap and his daughter getting poisoned in, Salisbury I did actually feel the “You don’t expect that sort of thing to happen around here” line was quite justified.

Bizarrely, I must admit to briefly having a sense of tenuous excitement towards the events in Salisbury. This is because I go shopping there quite a lot and I know The Maltings shopping area very well. How exciting that the KGB (ALLEGEDLY) had been in the same town where I go to buy new shoes!

The one thing that has grabbed my attention regarding the alleged use of a state controlled nerve agents on a former military man who sold secret to Britain, is what apart from nothing, can be done about it?

The moment Sergie Skripal took £72,000 of the Queen’s English pounds in exchange for secret documents and got caught by the Kremlin, I can only presume that he knew he was a dead man walking.

Even if he was part of an exchange deal involving Russian and Western spies and counter spies, I can only presume that Skripal knew that he was never going to be asked for tea with Vladimir Putin and politely reminded of his future conduct.

All evidence suggests that Putin doesn’t work like that.

So whilst we cry foul play and an international incident simmers, with Mr Useless (Boris Johnson) and Mrs Equally Useless (Amber Rudd) in charge, Britain must be very careful when they ask how James Bond villains were allowed the luxury of walking around Wiltshire market towns with complete freedom.

It’s because we invited them, stupid.

Whether it was Premier League football clubs, Mayfair estate agents, or greedy landowners looking to cash in by selling to gangsters who wanted to re-enact English period dramas in the Sussex hills, successive government of both colours let them waltz in.

Why? Well, because they had money and lots of it that needed laundering in a safe country.

There are now over 15,000 Russians in London, leading to jocular nicknames like ‘Londongrad’ and ‘Moscow on Thames’ and whilst it would be churlish, indeed, racist, to call them all gangsters, there will be a fair few of them on the payroll of Kleptocrats, so it is not difficult for the KGB to find themselves someone to knock off a traitor.

I don’t know the intricate workings of Russian finance but it is pretty common knowledge that Russia is, in effect, a Kleptocratic gangster state where a very privileged few live off the prosperity gained from Russian resources that were formerly controlled by the Communist State.

It’s completely immoral but trying telling that to football supporters who have seen their club pick up five Premier League titles and a European Cup after decades of failure, or an estate who becomes a multi-millionaire on the back of a Russian spending spree that made the Arabs of Bond Street look like skinflints.

It was immoral but also very hard for the UK to turn that money down and I myself have worked for London contractors who survived off the back of lavish Russian property refurbishments on Mayfair homes during the long commercial crash that started in 2008 and went on and on.

At some point between 2008 and 2012, by being at the bottom of the contracting food chain, I would have more than likely received a perfectly legitimate payment of money that would have started as a stolen rouble, so using that as an example; you can see how far Russian finance has infiltrated the system.

There are not many who haven’t had a piece of the action. Nightclubs, restaurants, private schools, Bentley dealerships, yacht manufactures…you could go on and on.

So, in reality, there is not a lot we can do when it is alleged that Putin has taken revenge on a traitor who was paid by the British government for information then given a £260,000 home and a government pension for his troubles (if only troubles rhymed with roubles)

I’m not saying it’s right and I am not saying it what we want happening in our country, but I am also not sure why we should be surprised that a country that doesn’t suffer traitors, acts in such a way.

If you allow these people to buy their way into your economy and establishment, you shouldn’t expect anything less.

Of course, this is all not such bad news for the PM. Her dreadful attempt at a Brexit speech was buried under a blizzard last week and has been followed by a different kind of ‘Beast from the East’ in the form of a plot from that dreadful BBC Drama, ‘Mc Mafia’.

You couldn’t make it up could you?

No Replies to "The KGB...You Don't Expect That Sort of Thing Around Here!"