There is a certain British way of dealing with standard late summer weather. During the first week, people have a kind of c'est la vie 'we needed the rain anyway' attitude, in the second week it is 'will it ever stop?' and by the end of the third week, frustration is boiling over as the masses sit, wipers at full tilt, in a traffic queue for a soulless indoor shopping center. It is a bit shit really, particularly shit if you play cricket in ...

Dog Walks and Daffodils for Christmas 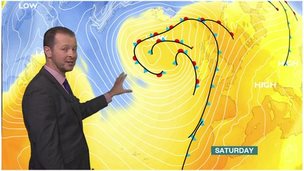 Wherever you go at the moment, all the talk is of how warm the weather is and I have to say it is a great conversation starter as I go through the learning process of how to be sociable to other dog walkers. "Aaah, spring already" or "Barbecue for Christmas then?" are just a couple of the quite hilarious opening gambits I have bestowed on approaching walkers who eye me with suspicion before going on to lecture me about the ups and downs of ...

Killer Mild Weather Expected to Meander in to Britain!

When September arrived this year, I decided that because I have moved around so much in the last year and had experienced the pleasure of having many of my items getting lost, or indeed, stolen, I would treat myself to an ‘Autumn Collection’ of clothing. Fortunately, common sense prevailed and I chose to ignore a plethora of Facebook and Twitter links associated to Nathan Rao and The Daily Express; otherwise I would be sat here in an ...

BBC Gripped by Weather Hysteria…And There’s More on the Way! 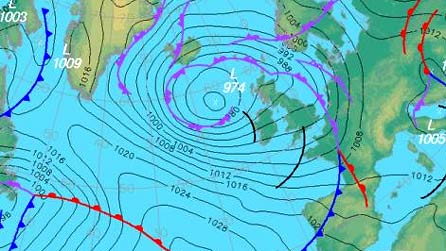 It would appear that The BBC is suffering its worst spell of weather hysteria this winter with experts predicting that this condition will last for at least the rest of the week. Clare, a BBC Breakfast reporter on a motorway bridge in Huddersfield, reported that last night the temperature had plummeted to -3c with a dusting of snow that is normally associated with winter on the West Yorkshire Moors. Clare, bless her, reported that the ... 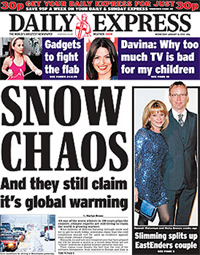 Britain could be in line for it worst winter of Daily Express headlines for over 100 years, experts have warned. Brian Scandal from the on-line tabloid scaremongering organisation, Expresscheck.com, believes that all the signs are pointing towards a winter of Express winter headlines like never seen before. "The signs are not good. We had our first Arctic winter headlines in September and they have persisted through the Autumn and into ...