Dog Walks and Daffodils for Christmas

Wherever you go at the moment, all the talk is of how warm the weather is and I have to say it is a great conversation starter as I go through the learning process of how to be sociable to other dog walkers.

“Aaah, spring already” or “Barbecue for Christmas then?” are just a couple of the quite hilarious opening gambits I have bestowed on approaching walkers who eye me with suspicion before going on to lecture me about the ups and downs of being a responsible pet owner.

Whether I am going to be a good dog owner or not is up for debate if I am honest, as a large percentage of my reasoning for getting one was so I could walk in the woods or through the rolling hills of Hampshire without looking like a sexual deviant.

It appears to me that some of these dog walking types love their animals more than their own children, portraying a disturbing allowance for physical affection that goes beyond what I would even carry out on my girlfriend, well in public at least.

In my mind it is a dog and with me it can walk until its little heart is content. However, it is learning fast that I don’t like to be licked like a Cornetto and I am certainly not a fan of his penis or anus. My dog can keep that detail for the vet whom I am happy to pay handsomely to deal with such issues, such as the apparent non-appearance of a testicle which I won’t be searching for any time soon.

He will be walked, fed, patted, stroked and socialized with dogs of friends but if he wishes to sleep on my bed or embark on licking competitions, he can call dog-line or whatever it is and find a new home with owners who don’t mind walking around smelling like a kennel.

As for the fellow walkers who have given me conflicting advice, I am assuming that now he is getting bigger they will leave me alone to get on with my walk in peace. I am not joking, if you walked along the street with the cutest baby on earth, you would get less attention than you would with a puppy. It is a novelty for a while, then it is a pain in the arse having to say how old he is, what exact breed he is, what food he eats and whether he is going to be a working dog and so on.

It did provide one funny moment, and that was when some chap said to Harry (my son) “Are you going to beat him?” This (for those who care not a jot about dogs) means working on pheasant hunts. Harry, who wasn’t to know that, looked rather shocked, assuming the chap was politely advocating domestic dog violence.

Anyway, back to the warm weather, as because some of you may have noticed, I like talking about the climate. This autumn, you will have no doubt been aware, has been incredibly warm and this has transcended in to winter with temperatures regularly hitting the mid-teens in terms of degrees centigrade (late 50’s if you deal in Fahrenheit). 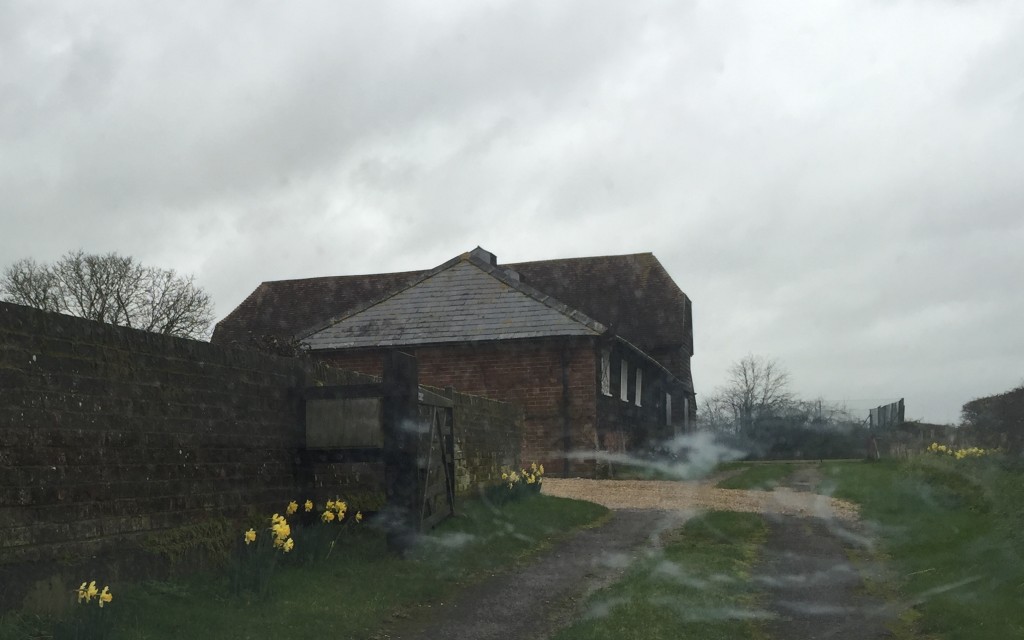 December Daffs that I spotted this morning.

Apparently this phenomenon has evolved from way back in the Pacific Ocean courtesy of a strong El Nino which in turn creates exceptionally warm seas. This warm air travels up across America, then bounces off the Arctic air trying to push south, spreads down towards the Azores and back up through the Sahara and the Canaries, through the Bay of Biscay and into the UK as warm but moist air, carrying cloud and rain but along with it, ludicrously high temperatures.

Is that global warming or just a phenomenon that has happened regularly over the millions of years the earth has existed?

I am not a raging climate sceptic as for one, I am not scientifically trained, for two, what has been pumped into the atmosphere since the industrial revolution must have had some negative results, and three, climate changes sceptics generally seem to be those self-righteous blokes in the pub who think they are the voice of Britain (think Nigel Farage with a metal beer tankard).

However, we only really have a couple of hundred years of data from our planet that has apparently been existence 4,600,000,000 years (give or take a year or so) so I reckon there might have been a few mild winters in there somewhere. As a consequence, when the Daily Express claims it is our hottest winter EVER, just weeks after predicting we are heading into a four month ICE AGE, they are exaggerating just a little.

The British climate is fickle, so it is worth remembering that even though it looks like it will be really warm (12-17c) for at least another fortnight, subtle changes in wind direction or the movement of the jet stream could still easily send a plunge of cold air southwards and give us an almighty shock to the system courtesy of a 15-20c temperature swing. It is supposed to get no lower than 15c tonight which is the expected night time temperature in mid-July; that is quite extraordinary, I must admit.

It also means the jumpers and heavy shirts I bought in September remain in my cupboard wondering what on earth they have done wrong to receive such a snub when the truth is, I would like to give them something to do. Warm weather has its bonuses but I must admit I am longing for a crunching walk through the frosty grass and the snow topped hills of Hampshire. It is what winter is about, surely?

Factually however, it is just another warm and moist winter amongst a host of other ones (it reached 18.3 c in 1948). I hate to put a downer on nostalgia but there was never a time when it snowed every winter, not in the last couple of centuries anyway. Selective memory allows us to reminisce about hot summers and snowy winters as if though they were once a regular occurrence. You never hear anyone say, “Oooh do you remember the summer of ’85, sunny spells and squally showers right through until September there was…eeeh you don’t get unsettled summers like you used to.”

If you want an example, take a look at the old crooner Bing Crosby. In 1936, Bing was dreaming of a white Christmas, just like the ones he USED to know. Know when? In the 1900’s?

Enjoy the warmth, although I can confirm it doesn’t stop you getting a cold.

1 Reply to "Dog Walks and Daffodils for Christmas"