Every time I think about writing something regarding Donald Trump, I decide to wait a little longer as I am probably only a week or so away from him doing or saying something even more outrageous than ever as he goes about the business of making Hitler look like a Liberal.

Being from the United Kingdom, what I do find hard to understand is whether there is a genuine threat that he will become the next President of the United States. My assumption is that he won’t, as the common decency in human beings will shine through the drama and the rhetoric.

However, that is because I am talking as British person where Conservatism with a small ‘c’ is stamped in our DNA and any past rise from the far-right has been lampooned and destroyed before the threat is anything more than an amusing and admittedly fascinating Channel 4 documentary.

I guess the biggest UK threat from the far-right came from the left of politics that evolved into the right of politics in the shape of Oswald Moseley in the 1930’s. This was when fascism was all the rage in Europe and entrenched in the minds of Royalty and the media, with Lord Rothermere’s Daily Mail leading the way.

Moseley, a charismatic aristocrat, famously ‘crossed the floor’  from the Conservatives to Labour before eventually (after being denied the position of Home Secretary) forming the BUF (Britain Union of Fascists) thus creating European ties in a fascist axis that included Berlin, Rome and Madrid. 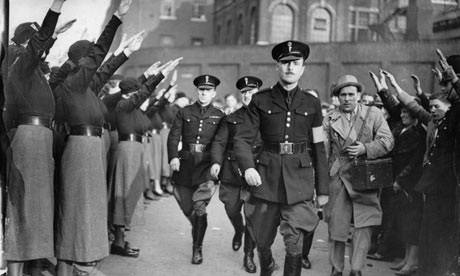 The rise of the BUF was a rapid one in the early 1930’s and with strong support from members of the aristocracy as well as Moseley’s undoubted talent as a formidable orator, it was seen, at least for a while, as a viable political alternative.

However, outbreaks of violence, notably at Olympia and at The Battle of Cable Street tempered enthusiasm, particularly in the media, with Lord Rothermere withdrawing support from The Daily Mail.

That is where the Trump rallies carry such familiarity to those of Moseley. Any dissenting voices are shut with violence and aggressive rhetoric that is sending a chill down the spine of at least some American’s who fear a repeat of 1930’s Europe.

Can the right-wing evangelists really make Trump a Republican President of America? Surely not?

My assumption was that all of his support comes from right-wing evangelists in the Deep South but the following statistics make interesting reading with regards to the voting percentages he has received so far.

The only consistency is immigration and the economy, which is concerning as it would appear there is a demand for National Socialism as advocated by Hitler and with less success, by Moseley (You may have heard of the Nazi party, it was rather popular in Germany once).

In Britain, the way we vote is still a reflection of our past, so it is highly unlikely we would ever see the rise of the far-right. This is because we tend to get caught up in a kind of safety-first policy of voting whilst wearing rose coloured spectacles and getting hoodwinked into thinking that we must return to the common values of yesteryear when decency prevailed.

This was a classic case in point in the 2015 election when voters, seeing Ed Milliband (who?) as unelectable, chose a person they didn’t much like (David Cameron) to be Prime Minister. The battleground of British politics sits in the centre ground with the centre-right holding sway, interrupted by occasional intrusions from someone on the centre-left (New Labour and Tony Blair for example) benefiting from the same Oxbridge taught Thespian skills as his political rivals.

This is good news for anti-fascism but not if you want to see another more progressive form of politics that looks to a brighter future rather than one that always harks on about the great days of the past that never existed, at least in the way they are are portrayed. Any new or changing face of British politics is quickly buried under the bunting of a Royal Wedding or Jubilee as the old establishment quickly regain control; it’s just the way it is.

Whether American voters think the British way or not, I am not qualified to say; however, in the Second World War, over 400 thousand Americans died and 600 thousand were injured as they led the way, driving the Nazis backwards from Normandy and into eventual oblivion during the liberation of Europe.

If I was an opponent of Trump, I would ask him what those soldiers were liberating Europe from.

No Replies to "Donald Trump and the Redneck Dream"