Sadness, Irony and a Bit of Common Sense – Another Mad Week in Britain

As every week passes, Britain seems to go that bit more crazy and this week has been no exception, with lashings of the following.

The murderer of MP, Jo Cox, Thomas Mair, was sentenced to life behind bars this week and will never be released. It doesn’t matter what your political persuasion is, she was a democratically elected member of parliament and a mother of two children, butchered in her constituency by a terrorist screaming ‘Britain First.’

The Daily Mail managed to find it within themselves to publish a piece about this on page 30 of their rag yesterday. Now, The Daily Mail can publish what they want, where they want, it is freedom of the press; however, just imagine if that attack had been carried out by a Islamic terrorist on a right-wing Conservative back bencher?

It would have been equally appalling, but would it have been on page 30? No, it would have been splashed all over the front pages. The warped moral compass of Paul Dacre and the the tax avoiding Rothermere family, never ceases to amaze me, yet the fact The Mail is still Britain’s number one selling newspaper, lends weight to the argument that there is xenophobia deep within the British DNA.

It was good to see Nigel Farage taking the piss again this week, offering a speech at the Ritz Hotel about crushing the elite who have controlled Britain for too long. Among his guests were working class heroes, Jacob Rees Mogg, Lord Ashcroft, the Barclay Brothers and his chief UKIP donor Arron Banks, who recently paid 12k corporation tax on £19.6 million annual profits.

He would have paid more of course, but as luck would have it, £19.5 million of the £19.6 million profit was used for administrative costs. In the world of Arron Banks, avoiding tax is being patriotic and standing up for ordinary folk. As for Jacob Rees Mogg, I think he died in 1856 but had his body frozen and was brought a back to life around 2010.

My other favourite piece of irony this week was seeing a photo on a forum in The Independent of bloke surrounded by Union Jacks and Brexit banners, wearing a T-Shirt with ‘The Clash’ written on it. Does he not know that the The Clash actively embraced multiculturalism and fronted the Anti-Nazi League concert, or does he think that the song ‘White Riot’ was a call to arms for fascists?

Perhaps The Clash are the new Ramones, there is no need to listen to the music, you can just wear one of their T-Shirts and pretend you are a UKIP rebel…Joe Strummer would spin in his grave. 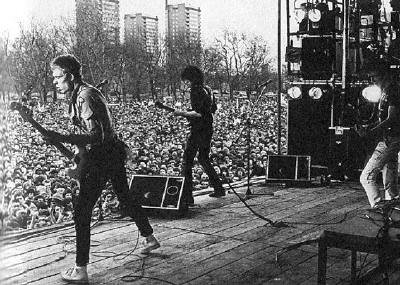 In case you hadn’t noticed, I am no Tory, but I have to say that out of all the nonsense abuse and moronic audience participation on Question Time I have seen this week, a ray of sunshine came from the perennially sensible and decent conservative, the former grey man of politics, John Major.

Here is what Major said yesterday.

“I hear the argument that the 48% of people who voted to stay should have no say in what happens,” he said. “I find that very difficult to accept. The tyranny of the majority has never applied in a democracy and it should not apply in this particular democracy.”

The world has gone so mad that I find myself in a position where I regard a conservative as a level thinker, mind you that is because we are sat  in an asylum full of lunatics like Nigel Farage, loathsome little toad that he is.

Have a good weekend!

No Replies to "Sadness, Irony and a Bit of Common Sense - Another Mad Week in Britain"