Could Britain Ever Do a Venezuela?

I don’t know if any of you have been reading about the carnage unfolding in Venezuela? Quite frankly, I wouldn’t blame you if you haven’t, as it is depressing beyond comprehension.

The easy bit is understanding how this happened. Venezuela was corrupted by greed because of its incredible oil resources and as a consequence, the elected socialist movement under Hugo Chavez (Maduro’s predecessor) set out a policy of wealth redistribution to improve the lives of many, not just a few (I have heard that somewhere before).

As far as I can gather, it was an ideology that worked well, with a 30% drop in poverty and an increase in both living and education standards. Then the price of a barrel of oil plummeted from treble digits to $50 and that ladies and gentleman, was that. You don’t have to be Albert Einstein to work out that if extraction costs more than your selling price, you have a problem or in Venezuela’s case, social and economic breakdown.

Everything you read from thereon is a mixture of propaganda, fake news and a simplistic way of demonising the virtues of socialism by using Venezuela as an example of how wealth distribution and a quest for a fairer society does not work and never will. Maybe it wont? 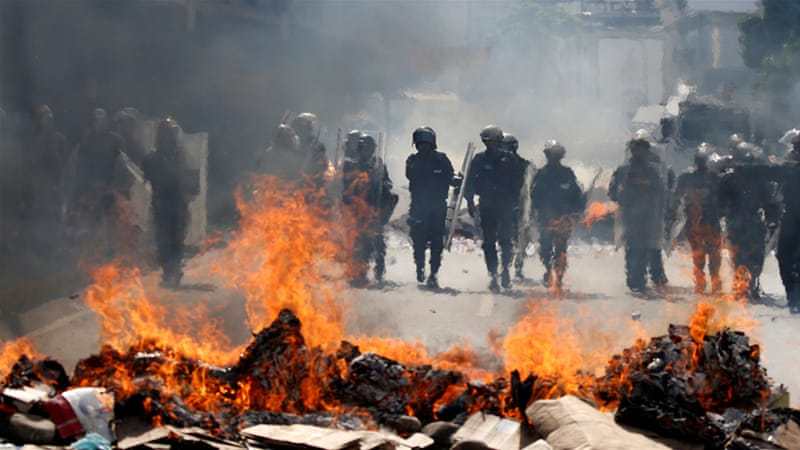 Carnage: Venezuela looks like a scene from Mad Max

Economists say that Venezuela spectacularly failed to diversify its economy away from oil but whilst that is obvious, I would say that is easier said than done. What do you replace oil with in terms of a cash cow? Cocaine perhaps?

What’s intriguing now is how the world is viewing Maduro, who appears, on the face of it, to be turning into a dictator. My question is this. Is he doing this solely to protect himself and his loyalists, or is he doing it to protect his nation from a right-wing military dictatorship where all the power and money will go back into the corrupt hands of yesteryear? Perhaps it is a combination of both?

What you can’t afford to do is allow yourself to be swayed by the opinions of lunatics like Boris Johnson and Donald Trump because, for historical and geographical reasons, you wont get the truth from either of them. America have a history of issues with elected socialist regimes in South America and have long been sponsors of often violent military intervention leading to right wing dictatorships. These acts have generally been backed or at best ignored by the UK. We can’t upset the US at the moment as we need to buy chlorine chickens from them as part of a new trade deal.

I am not a fan of the British government statements on morality all the while our they allow dealers to sell arms to Saudi Arabia (a vicious regime) to blow kids to bits in the Yemen. I also find it disturbing that the Saudi obliteration of the Yemen is barely (apart from on C4) on the news when it should be right up there in lights as a headline act.

This is not to say that extreme Left-Wing governments can’t become authoritarian because we know they have been horrifically so in the past. It may be the case that Maduro is an evil dictator in the form of Josef Stalin and (if you believe what you read) it would appear that traditional Chavistas are now turning on him in huge numbers as the carnage intensifies and constitutions are rewritten to halt the rise of the opposition.

It is also important to understand why there is violence. I don’t know the direct answer but it could be (it has happened before) that it is being caused by traitors sponsored by outside sources (the US for instance) who wish for a return to the days when all the power and wealth was in too few hands. There is a Chilean and Cuban air to all this, however, to say that the US have driven oil prices down on purpose is fanciful and it more likely the fault of the Middle Eastern price war caused by excessive supply.

Some of the more preposterous right-wing media outlets are suggesting that Venezuela is what Britain could become under Jeremy Corbyn but there is little evidence for that, as for one, Britain is not solely dependent on the price of oil, and two, in the unlikely event that Corbyn became authoritarian, he would soon be rejected by the voters. Rejected in the same way as Theresa May when she made and aggressive push for a complete parliamentary authority back in June.

What we learn from history is that any ideology can become infected by dictatorship because if socialist movements shut down and cut off opposition, then freedom has gone. In our world, there are those who wish to be led by an all powerful hierarchy who will protect them and those who want complete freedom and independent thought. Both will always want the other destroyed, hence the inevitable violence and the oft used term ‘One man’s terrorist is another man’s freedom fighter’.

What we also need to learn from history is that intelligent socialism has generally been the way to make the world a better place, unless you are an incredibly wealthy member of the ruling classes. The 1945 annihilation of Churchill’s Conservatives and the advent of Post-War British Socialism, brought huge benefits when the controlling elite demanded the masses were not worthy of such luxuries as health, welfare, employment and human rights. If you were born in, or have ever been treated in an NHS hospital and you hate the principle of Socialism, you are a hypocrite.

So, if anything can be learnt by Britain from Venezuela, it is you cannot create a successful ideology for your nation with all your eggs in one basket, or should I say all your oil in one barrell. It would also be prudent not to voluntarily cut your ties with 27 customers on your doorstep.

As a centrist Tory MP said recently. ‘Britain needs to wake up and realise it is interdependent’.

No Replies to "Could Britain Ever Do a Venezuela?"