Whilst Wales and Scotland tumbled out of the World Cup and both the Ireland’s go into the play-off lottery, England, much maligned and disappointing throughout, actually cruised to the finals with an 8 point cushion and no defeats.

Qualifiers didn’t used to be like this and although England were often as turgid as they are now, there was real drama in qualifying. Remember Terry Butcher and his bloodied head against the Swedes, and the shuddering of Peter Shilton’s crossbar from a fierce Polish strike that would have sent England out of the 1990 tournament at qualifying stage?

And what about the tension filled night in Rome in 1997 when Paul Gascoigne put on one of the most technically excellent displays of his chequered career, or Owen’s hat-trick in Munich and Beckham’s scorcher to equalise against Greece and secure a place in Japan and send the Germans to a play-off? 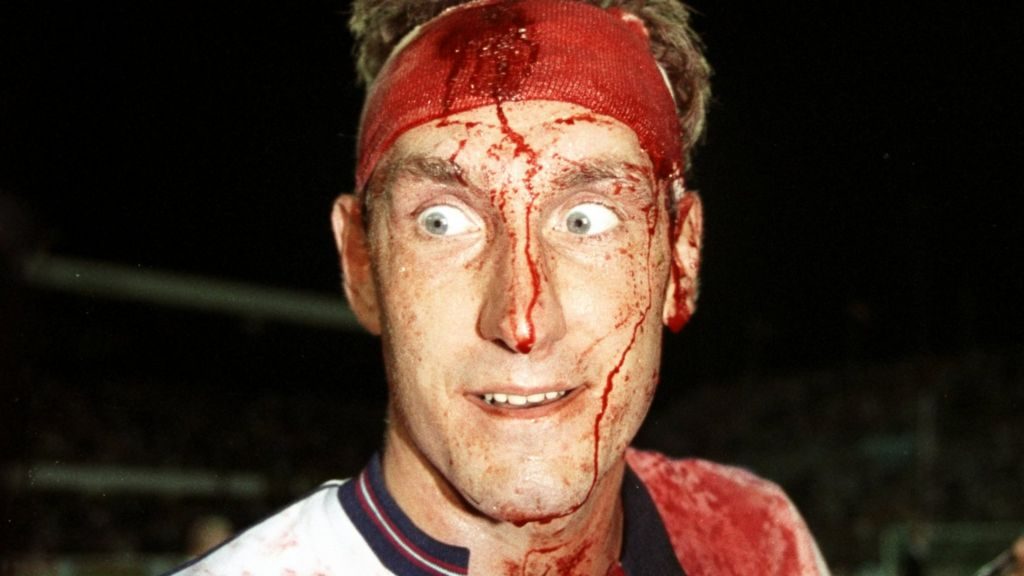 Terry Butcher the Bloody Marvel: Qualifiers used to be high on drama and intensity

Since then, because of a huge breakup of the Soviet states and the inclusion of teams like Malta and the Faroe Islands, if you can maintain your seeding, qualifying is a foregone conclusion with the subsequent build-up of ranking points and ultimate qualification, allowing further seeding and simple paths to tournaments.

This has been the case for England for years now and is highlighted as soon as they arrive at tournaments unprepared for bigger tests. As a consequence the enthusiasm for qualifying has died amongst supporters and indeed players of moderate talent that is hyped up to silly levels, courtesy in the rough and tumble of the Premier League and all its cash.

That is why apathy has set in. England waltz through qualification against teams whose players ply their trade in the lower echelons of professional football and even the part-time leagues. They rarely have to get out of first gear and are sometimes outplayed by teams with superior ball retention and passing ability but no end product. This normally results in a pedestrian 1-0 victory, courtesy of nothing more than better fitness as paper aeroplanes float onto the pitch.

England are not alone. Holland have failed to qualify whilst Italy and European champions Portugal will have to go through the playoffs. Spain have received similar jeering to England during pedestrian performances as players are aware of Champions League matches and the need to stay fit for their paymasters and out of the way of the studs of non league headline seekers. International football is dying.

How We Judge Our Talent

Most of you reading this who have played football will have paid to play, probably around £5 to £10 per week. We have a terrible habit of judging the ability of our players on the wages they earn and whilst I have no issue with players maximising their income in the mad world of the Premier League, Jordan Henderson is not 150 thousand times better than me in my mediocre pomp. Twenty, thirty, maybe even a 100 times better, but not 150 thousand times better. It’s not possible.

When he plays against someone from Slovenia who is perhaps on £1000 per week, he is not 150 times better. It is not possible unless he learns to flip the ball on his head and run the pitch length to score, so basing player’s talents on their wages is just stupid. Players like Henderson are paid a lot in the PL because they have good energy levels and the consistency of performance required in a league that is demanding but not technically strong outside the top three or four who have a huge foreign influence.

From a young age, players are taught to treat the ball like a hot potato in a crisis, leading to errors, rash tackles, chasing lost causes and lots of chances on goal in calamity strewn matches. That’s what the British public want and that kind of energy and fitness is enough to just about overcome lower ranked teams at international level. However, it is nowhere near enough against teams with the same stamina levels but more technique and patience with the ball at their feet.

When I see kids football now, technique has improved massively since I played in a team where the manager screamed ‘HIT IT’ as soon as you got 40 yards from goal but it is still a long way behind, played on awful under funded council pitches covered in ruts and dog shit.

Can anything be done to stop the decline of international football in England?

Where Should England Play?

Against teams with a small population, England have to move back to touring the country to regain enthusiasm. Wembley is massive and is very hollow when half empty, leaving the fans distant and quiet and the players lacking motivation whilst their opponents love it. Playing to tighter, packed venues that hold between 30 to 40 thousand fans would help generate a better atmosphere with clubs and supporters up and down the country embracing the chance to host internationals.

It is not the answer but it would help, although I doubt it will happen as Wembley needs the revenue.

Can England be Interesting Again?

In my lifetime, England have never been that good but there was a time when they generated enough enthusiasm to make you want to support them. This was aided by players who appeared desperate to play for their national team despite their limitations. Limitation has always been forgivable if you are at least trying, as you will witness with other home international teams such as the two Irelands, who are into the playoffs.

We are constantly told that England players care like nothing else when it comes to playing for the country and I do tend to think that not caring is an easy excuse for ranters. The truth probably is that even though they do care, with England, they are often abused by maniacs, some with unsavoury right-wing agendas, whilst at their clubs they are being handsomely rewarded and idolised way above their station.

Football is a profession after all and put in this context, if you had one client who paid you on time and offered you lavish appreciation for your work, you would be mad to appreciate them less than someone who demanded total excellence otherwise they would drown you in vitriol. Players must sometimes look at the English support and wonder why they bother making themselves available. It has got that bad between player and supporter, with blame to be laid at the feet of both parties.

When I watched Euro 2016 last year, it was awful in all aspects. There were huge contingents of cretins smashing things up and crying foul play after getting staved in by tough looking Russians, and on the pitch, England were all over the place before getting deservedly humiliated by an ordinary Iceland team who were riding a wave of national unity between players and fans.

I don’t think we have got over that and I am not sure we ever will. Possibly the only way forward for the  national game is to somehow lower expectation levels in the media and ignore the hype around salaries and the model of the Premier League. It is the Premier League that is is creating players who are elevated well above their skill levels.

If we were able to understand the level that our current crop of players are at, we might be able to appreciate qualification and go to the finals with little expectation but happy to enjoy any fleeting moment of glory a bit of luck and support might bring. With expectations lowered, I guarantee the players would do better and England as an international outfit might actually turn a corner.

However, with an uninspirational manager, fans and media obsessed by player salaries and an association in denial of the demise of international football, don’t hold your breath. At the moment, the fans are getting the team their hatred deserves and the players are losing interest, even if they vehemently deny it.

Unless English football is more honest with itself, Russia, with its hostile fans, could be when we finally hit rock bottom.

No Replies to "England's Self-Fulfilling Prophecy"