Rumours are circulating in the media that Boris Johnson has demanded that the government passes a bill to fund a housing programme to end homelessness. However, Johnson has apparently received a rebuke from Housing Minister, Dominic Raab, for interfering in Government housing programs and pushing for a project called ‘Boris Homes’ at a cost of around £500 million.

This follows the Boris Bridge to France and the £100 million a week for the Boris NHS as Johnson seeks to prove to the 48% of referendum remain voters that he is not really a cunt after all. 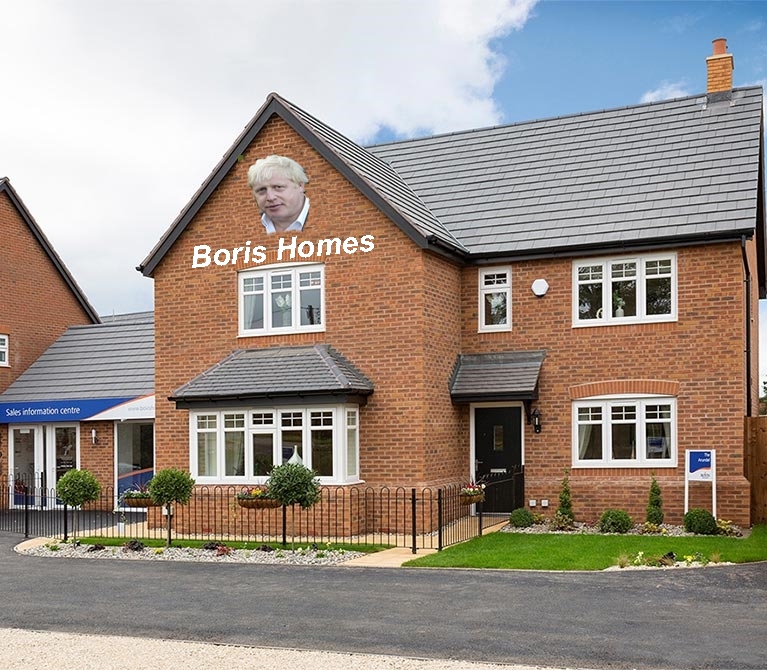 Help the Homeless: One of Johnson’s planned 5 bedroom homes

Political observers have suggested that this is just another attempt at publicity by Johnson as he desperately tries to regain votes from members of the public who once voted for him because they thought it was funny when he got stuck on a trapeze.

However, Johnson came out with all guns blazing, calling his critics, “great supine protoplasmic invertebrate jellies with more hot air than the wind section of the London Philharmonic ”.

The public are split down the middle with their opinion on Johnson, so he knows that somehow he has to win them back after he lent his support to a preposterous claim on the side of a red bus back in 2016.

With one insider saying that Johnson’s latest attempts at winning back supporters make a Katie Price wedding look sophisticated, it appears, on the face of it, that the former favourite to be the next PM is entrenched in an excruciating demise to a backdrop of bullshit ideologies.

However, Johnson still has his supporters, with a recent Trottalong Poll indicating that several million UK citizens think that deliberately falling off a bike in a union jack pair of trousers makes someone fit to lead the UK through Brexit negotiations.

However, for the first time, the poll suggests that Johnson’s cretin rating has overtaken his ‘I like him he’s funny’ rating and his attempts to reverse the trend are looking increasingly desperate with even some of the more gullible members of the public realising he is just devious piece of shit.

Next week: Boris Johnson unveils plans to pay pensioners £100k per annum whilst calling a woman in an Iranian prison a British spy.

No Replies to "Johnson Demands Five Bedroom Houses for the Homeless"