One of the more, shall we say, charismatic Brexit figures, is rugged faced King of cheap booze, Tim Martin, owner of the JD Wetherspoon pub chains. Wetherspoon’s are well known for presenting well-kept beer at cheap prices due (I am led to believe) to it being purchased shortly before its sell by date and turned over quickly.

I don’t have a problem with that concept and although I have many friends who would not set foot in ‘Spoons’ due to the eclectic nature of the clientele, I go in there occasionally and I have always been impressed with the standard of the bitters that are on sale.

Anyway, despite coming across as a bit of an oddball (he is from Norwich after all) Tim Martin must be quite an intelligent man. I say that because according to Wikipedia, he studied law at Nottingham University and qualified to be a barrister (although he never did practice).

You may have noticed recently that Tim Martin has been quite active on TV and Radio complaining about the EU and the enormous amount of duty they are imposing on beer and wine that he is importing into the UK. Because of this, Martin has announced that he has no option but to stop selling French wines and German beers.

Martin’s claims seemed a bit suspect to me because I always thought it was the UK who chose to put a much higher levy on beers and wines than that of their EU counterparts. Could Mr Martin, a shrewd businessman, be fabricating the truth, or is he just a bit thick? Or, equally as likely, am I the confused one here?

I decided that before I made a clown of myself (leading to me having to re-read Jon Ronson’s excellent, ‘So You’ve Been Publicly Shamed’ ) I would go against the post-Brexit norm and find out the facts about alcohol duty, rather than listening to some ‘Free Tommy’ fuckwitt who has no concept of anything except hating brown people.

By luck, I came across a piece that was posted on the Facebook group, ‘Pragmatic Resistance‘. It was written by someone who worked in HMRC compliance and came complete with a graph (see below) demonstrating UK levies on imported beer and wines.

This is what the chap said. It’s quite easy to understand (that’s why I like it).

“Basically, the EU sets minimum rates of Duty on Beer and Wines and our UK government chooses to levy taxes that are between 7 and 27 times HIGHER than this minimum. UK government revenue is 63% of the total duty charged on wine throughout the whole of the EU!” 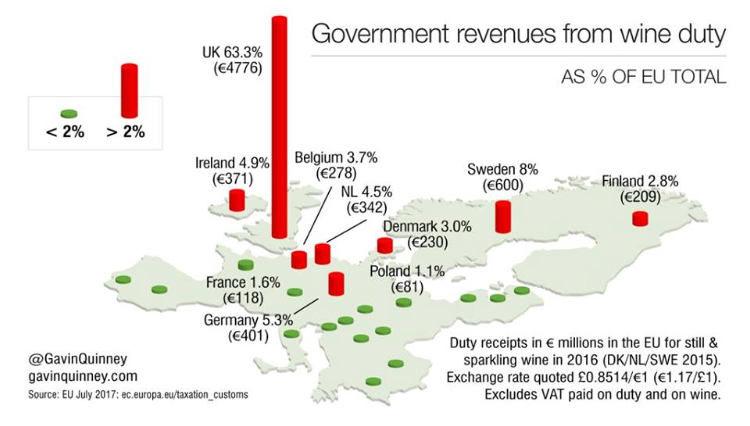 There are two conclusions to be made here.

1/ Tim Martin is lying about the EU/UK Wine and Beer duties. Why? I don’t know… perhaps because he is championing Brexit for the potential it carries to reduce low paid workers rights and food hygiene standards?

2/Despite being a trained lawyer and a very successful businessman, he and his accountants don’t understand the duty structure at the heart of his business.

I’ll let you decide which.

No Replies to "Tim Martin, Wetherspoons and Duty on Beers & Wines!"